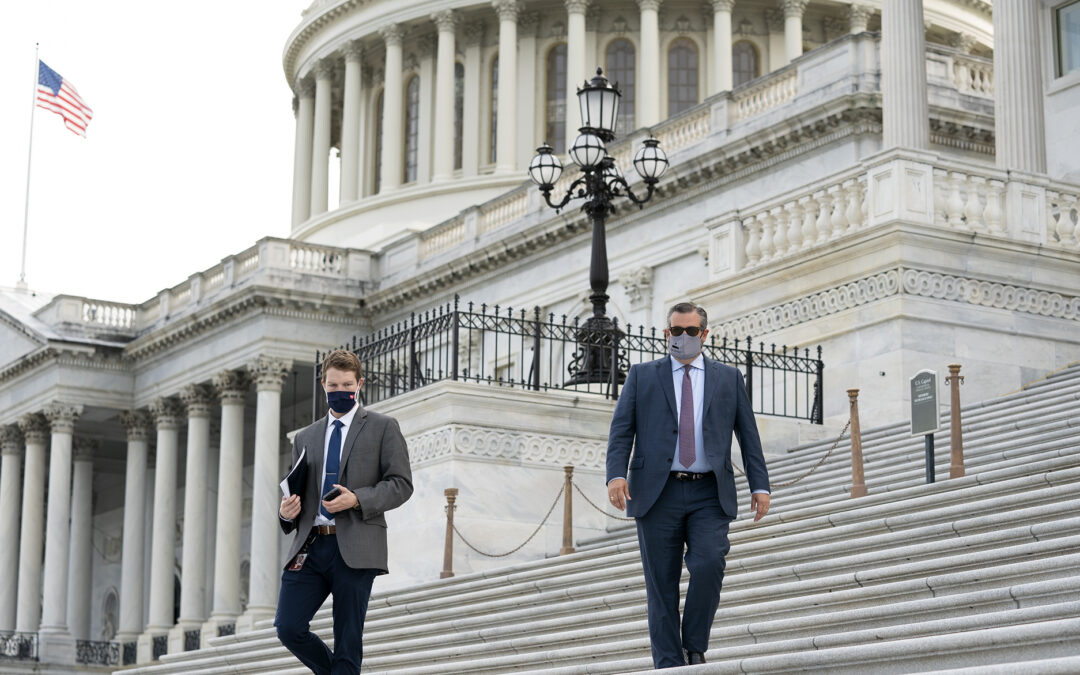 Originally published on November 24, 2020, at Hewlett.org

The COVID pandemic helped accelerate efforts to modernize Congress. U.S. Democracy Program Officer Jean Bordewich weighs in on the changes and what’s in store for the future. This is part of Think Again, a series of essays from Hewlett Foundation experts exploring how the current crises are catalyzing change—and what that could mean for reimagining a better future.

For more than 25 years, Congress has relentlessly sabotaged itself with ill-conceived budget cuts, outdated personnel practices, failure to keep up with technology, and other signs of an organization that lacked faith in its purpose. But over the last several years, that downward spiral slowed and started to turn around. Then two unexpected things happened: In 2019, the House established the Select Committee on the Modernization of Congress (SCOMC) and in 2020, the COVID pandemic arrived. Together they have catalyzed change.

Congress has been a workplace that relies on deliberation, personal relationships, and in-person meetings, not technology, speed, or data-driven efficiency. It took decades for television cameras to be installed in the House and Senate chambers, partially out of fear over how they would alter the deliberation process. Thirty-five years later, the cameras are still fixed, permitted to show only the speaker, not what is going on in the entire room, and all other video recording is prohibited. Even visitors to the galleries check their “electronics” outside to prevent surreptitious recording or photos.

Congress will never be an early adopter. Innovations embraced over the years in other sectors, such as video conferencing, collaborative software, or teleworking, were often considered ill-suited to Congress’s type of work or security concerns.

Another factor is the decentralized nature of the institution, which makes it hard to advance consistent organizational practices. There’s no central human resources function, for example, though the SCOMC recommended one be created in the House. Each office theoretically operates as an “independent business,” but it also must comply with House rules about what equipment, programs, and outside technology services an office can purchase.

Making information about Congress readily accessible to the public electronically has taken years. For example, until 2019, Congress.gov, the official one-stop website for Congressional information which gets one million visits a month, didn’t offer a calendar of committee activities (private vendors offered it for a fee). Until 2018, Senators still filed their campaign finance reports on paper with the Secretary of the Senate rather than electronically with the FEC like every other candidate. The Secretary then converted the paper to electronic reports and filed them with the Federal Election Commission at considerable taxpayer expense and delay.

At the urging of younger, more tech-savvy Members of Congress, Speaker Nancy Pelosi created the SCOMC as a short-term committee for the 116th Congress only. It was immediately embraced by Democrats and Republicans alike. Led by Chairman Derek Kilmer (D-WA) and Vice Chair Tom Graves (R-GA), it opted for bipartisanship over division. For example, the SCOMC had an equal number of Democratic and Republican members and a staff equally divided by party who worked together as one team. Kilmer and Graves insisted all recommendations be reported out with overwhelming, bipartisan support of committee members—a rarity in Congress today.

When the SCOMC began work, the knowledge and preparation of Hewlett grantees were indispensable. Almost a dozen of them coalesced into an informal working group that the committee relied on for help with identifying issues and solutions, historical background, research, and committee witnesses. Several consultants to the committee also came from Hewlett grantee organizations.

The impact of the pandemic

Then COVID slammed like a hurricane into a Congress that wasn’t prepared to work remotely, much less hold hearings or pass legislation virtually. The House ramped up, purchasing 1,000 new laptops in late February and helping staff upgrade their existing government laptops to work from home. New software, such as virtual meeting programs, were quickly approved for official use, a process that usually takes months or years. And rules were changed to allow interns to work off site and be paid.

Conducting official business, including committee work and floor votes, was more problematic. Initially, the House was reluctant to allow remote deliberations. But Hewlett grantees worked feverishly behind the scenes to show it could be done. They set up two virtual “mock hearings” online, one on March 23 and another on April 16, which featured retired General David Petraeus among the witnesses. Former Members of Congress acted as the “committee” and questioned witnesses remotely, without any significant problems. With this proof, both House and Senate committees soon conducted official virtual hearings of their own.

By May 15, the House had changed its rules to officially permit remote hearings and markups; and five days later, it allowed digital submission of bills, co-sponsorships, and statements for the record, which our grantees had advocated for years.

The pandemic also pushed the House to approve and Members to start experimenting for the first time with tech tools like Webex, Facebook Live and others that connect with constituents and colleagues in new ways from either their districts or DC.

According to “The Future of Citizen Engagement: Pre-COVID Challenges to Constituent Communication,” a report released in late October by the Congressional Management Foundation, most offices expect their COVID-created ways of engaging virtually with constituents to persist.

The SCOMC envisioned an institution that reclaims its Article I power and prerogatives, invests in its talent and technology, and nurtures a culture of civility and bipartisanship. Radical steps are required to get there, but the SCOMC has created a roadmap for the journey. Its final report made 97 recommendations in 15 categories. A resolution adopting the first 29 passed the full House overwhelming in March 2020, an unusual bipartisan endorsement of change. The House is expected to act on the remaining recommendations soon.

Here are a few of its 97 ideas: Streamlined bill-writing, public tracking of amendments, better public information about lobbyists and lobbying, one-click access to see how Members of Congress vote in committee, and more flexible working conditions, including telework.

The SCOMC also endorsed bipartisan solutions to thorny issues such as the Congressional calendar, raising staff salaries, and revamping staffing and procedures in committees. In its final months, the SCOMC even passed recommendations for reforming the budget and appropriations process and creating a new program for Congress to direct federal spending for local community projects, replacing the abandoned “earmarks” system.

It’s likely the House will vote before the end of 2020 on another set of SCOMC recommendations. When approved, some recommendations will be referred to standing committees for further actions, while others could be implemented without legislation by House Leadership or the Committee on House Administration. It’s also possible the House may vote to set up another kind of Modernization Committee to continue developing proposals.

Meanwhile, the Hewlett grantee organizations who regularly shared information, strategies and resources in support of the SCOMC are now exploring how to support modernization in the Senate. The Senate is organized differently than the House, but it similarly suffers from lags in adopting technology tools, lack of strong, centralized human resources and career development support, and uncertainty over how and when to permit remote operations under its rules.

Like the House, initial Senate opposition to remote operations dissipated in the face of necessity. Far from being relegated to only low-priority matters, a hybrid model of in-person and remote participation has already been used for one of the most monumental Senate responsibilities: confirmation hearings for a Supreme Court Justice. And the majority of Senate staff members have been working from home for months.

Members and staff are discovering that certain kinds of modernization forced by the pandemic and encouraged by the thoughtful, bipartisan institutional efforts of the Select Committee on the Modernization of Congress will remake the 21st century Congress faster than anyone imagined two years ago. What course that will take, and how fast, will be front-and-center for the 117th Congress.